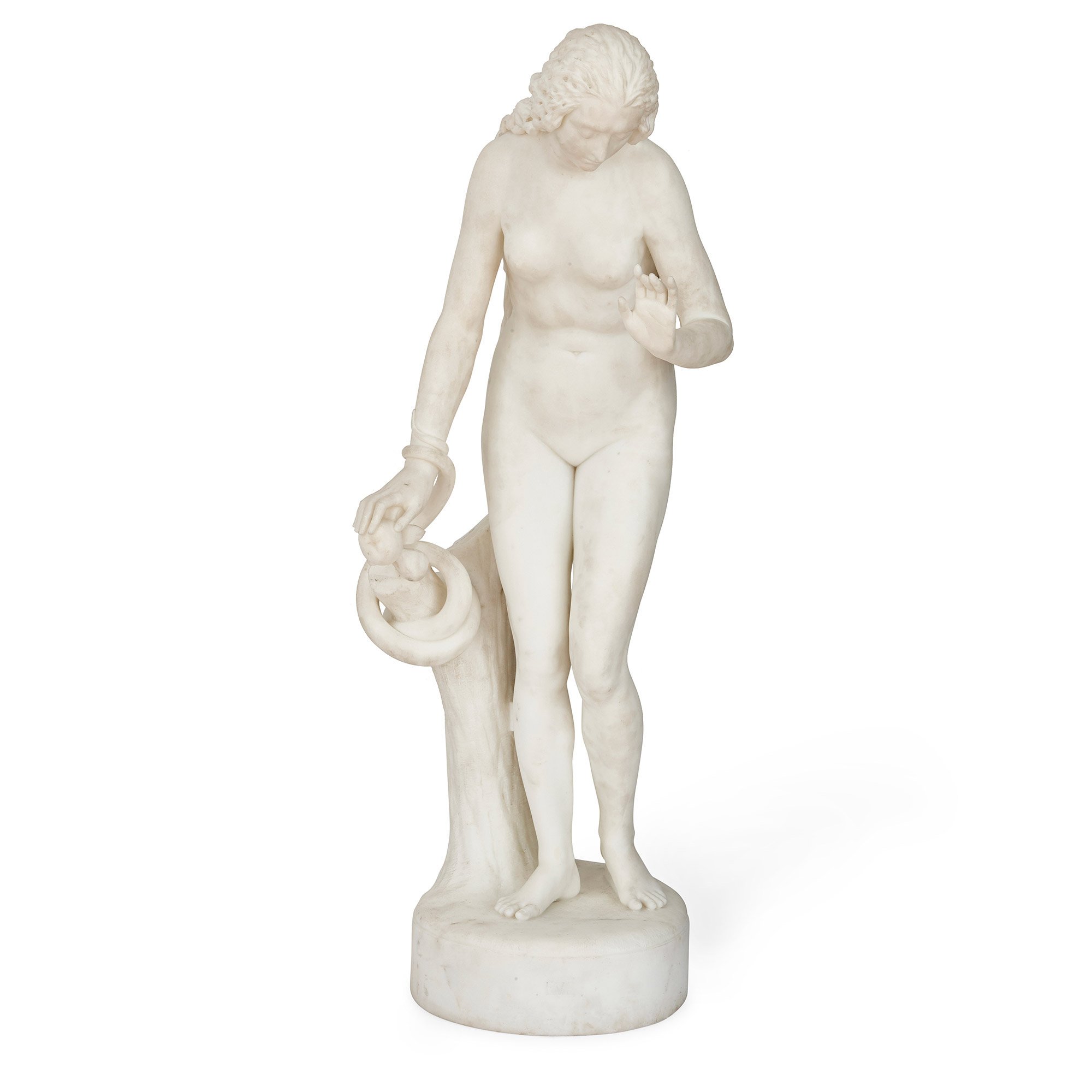 Have your marble sculptures appraised online by a specialist.

How much is my marble sculpture worth?

Have you recently inherited or purchased a marble sculpture and want to know its value? Mearto provides quick and affordable online appraisals of marble sculptures. All you have to do is click on the “Start Appraisal” button above and follow the steps to send us information about and images of your marble sculpture. One of our qualified and experienced specialists will review and get back to you with a fair market and insurance value, typically within 48 hours. Have questions about the valuation provided, or would you like some advice about selling your marble sculpture? We are here to help! Our platform allows you to chat back and forth with a specialist to ensure that all of your questions are answered.

What is marble and why is it so frequently used for sculptures?

Marble is a rock derived from limestone. It comes in a variety of colors including black, green, pink and white. Sculptures were traditionally carved from white marble and then painted and sometimes adorned with gems and precious stones, but as time passed, the paint wore off and the precious materials were stolen. When classical Greek and Roman classical sculptures were discovered, they appeared white, despite the vibrancy of their intended aesthetic. So, the aesthetic of the pure white sculpture actually came to be due to a misunderstanding! Marble is also considered a popular medium for figural sculpting because it has a slight surface translucency that is similar to human skin.

Which kind of marble is the most popular for sculptures?

Italian marble from the city of Carrara, called Carrara marble, is the most well-known and highly sought after marble used by sculptors. Carrara marble is usually white or blue-gray in color and has been used in building and sculpture since ancient Roman times. The famous Italian Renaissance sculptor, Michelangelo Buonarotti, frequently had the marble he used in his world-famous sculptures quarried from Carrara.

How do you sculpt a statue out of marble?

Sculptors use a reductive method of creating a sculpture (as opposed to additive like with techniques like paper mache). Sculptors begin by “pitching” or knocking off excess chunks of marble from a large block with a chisel and mallet to quickly and rhythmically “rough out” the general shape of the piece, being very careful not to remove too much of the stone that they might need later on. Some artists, like Michelangelo, carve directly into the stone without the benefit of a model. Other artists prefer to make small clay models before they tackle the permanence of the marble.

As the sculpting process evolves from general to detailed, the tools change and the treatment of the stone becomes smoother. The final step to marble sculpting is polishing the stone, which gives the final product a highly reflective surface. Though polishing marble was not a normal part of his sculpting process, the Pieta, arguably one of Michelangelo’s most well-known marble sculptures, is also his most highly polished piece.

What are the most famous and expensive marble sculptures?

The Parthenon Marbles, or Elgin marbles,  (447-438 B.C.) are an excellent example of ancient Greek sculpture that is not free-standing, but were carved into the architectural elements of the structure of the Parthenon. These sculptures are also the subject of intense debate. Having been “acquired” by a British explorer by the name of Lord Elgin in the 18th century, these important pieces of Greek cultural heritage remain housed in the British Museum, despite repeated requests for their return by the Greek government.

Laocoön and His Sons, or the Laocoön Group, by Agesander was excavated in Rome, in perhaps suspiciously good condition, in 1506. There is some controversy about whether or not this is the same sculpture from the 2nd century B.C. that was praised by Roman art writer, Pliny the Elder.

Michelangelo’s David still baffles viewers today. Said to be made from a flawed block of marble abandoned by another artist, this monumental statue from the 15th century can still be seen in its own custom wing of the Florence Academy of Art in Florence, Italy.

Gian Lorenzo Bernini’s masterful marble sculpture Apollo and Daphne from the 16th century conveys an as yet unprecedented delicacy and level of detail in marble sculpture.

Antonio Canova’s Psyche Revived by Cupid’s Kiss of the 18th century pushes the medium of marble in sculpture even further with the large, delicate, and uncharacteristically unsupported wings of Cupid. The execution of this sculpture must have been exceptionally difficult to balance the weight of the material with the delicacy of the desired aesthetic. Another sculpture by Antonio Canova, a version of the Three Graces, sold for a staggering $10.4 million in 1989 through a private sale and is currently on view in the Victoria and Albert Museum in London.

Mearto offers two opportunities to sell your marble sculpture based on its current fair market value:

Customers with marble sculpture expected to sell for $5,000 or more can take advantage of our complimentary Consignment Concierge service. We will contact leading auction houses on your behalf, collect offers and help you negotiate the terms of a consignment agreement. There is no additional fee or commission for this service.

For customers with marble sculpture valued between $50 and $5,000, Mearto offers an exclusive Marketplace, which is accessed by a number of art, antiques and collectibles dealers around the world. If there is interest in your item, you will be contacted directly with offers through our platform. In the event of a successful sale, Mearto takes a 7% transaction fee.

To learn more about options for selling your marble sculpture through Mearto, please click here.