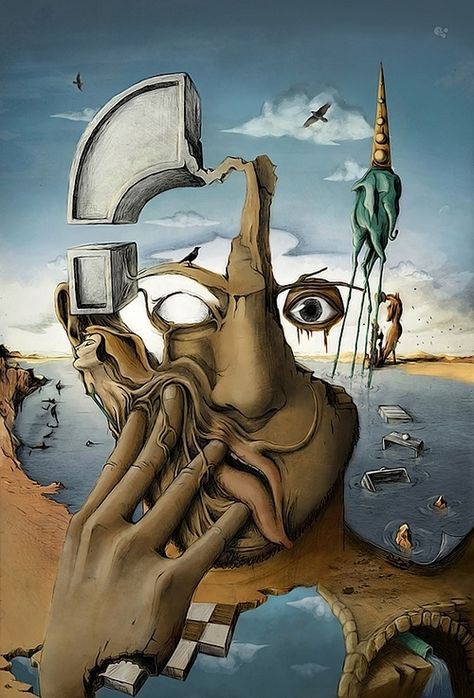 Have your surrealist paintings appraised online by a specialist.

Surrealism was a cultural movement that occurred in Europe in the wake of World War I. Though Surrealism initially began as a literary movement, it is now today for its visual art products. It was influenced by the artistic movement Dadaism and is known for the resultant writings and paintings of juxtaposed uncommon imagery. The word “surreal” is defined as marked by the intense irrational reality of a dream. The Surrealist Manifesto was published by the French poet and art critic André Brenton in 1924, marking the beginning of the movement. As a devout Marxist, Brenton believed tha art springs from the efforts of the collective which likely led him to open a Bureau for Surrealist Research where members conducted interviews and assembled an archive of sociological studies and dream images. While the movement began in France, it spread around the world impacting not only art, but music, literature, philosophy, and film.

Early followers of Surrealism were revolutionaries and their art expresses their desire to unleash the full, unbridled potential of human creativity. Surrealist artists often relied on drawing games and other unconventional techniques in an effort to randomize the artistic process and the artistic  products of their experiments.

Do you want to sell your surrealist paintings?

Who are the most famous Surrealist artists?

Perhaps the most popular and well known Surrealist artist is Salvador Dalí who is known not only for his mesmerizing art, but also for his unique and outlandish personal style. Dalí is known for his use of bizarre symbolism and imagery in his paintings, drawings, and prints. Other notable Surrealist artists include Max Ernst, René Magritte, Joan Miro, Man Ray, and Giorgio De Chirico.

In terms of value, Joan Miro holds the top three spots in most expensive examples of Surrealist paintings ever sold. The most expensive of these, and of the artist’s selling history is Painting (Blue Star) which sold for $36,955, 820. Fourth on the list is held by Dalí with Portrait de Paul Eluard which sold for $21,673,805. Coming in at number 5 on the list is René Magritte’s La corde sensible which sold for $17,926,044. Despite insisting that she was not a Surrealist, Frieda Khalo’s intensely psychological portraits often categorize her amongst the Surrealists.

What are some of the characteristics of a Surrealist painting?

As mentioned, the hallmark of Surrealist art is the juxtaposition of unconventional, often symbolic,  imagery. Additionally, Surrealism includes:

How old is my Surrealist painting?

Surrealism, while it certainly was most popular during the 18th century, was glimpsed very early in art history by 13th and 14th century artists like Hieronymus Bosch and Giuseppe Arcimboldo. There are also contemporary artists that also embrace surrealist aesthetics, so if you are interested in older surrealist paintings, there are some tips to test the age of an oil painting: