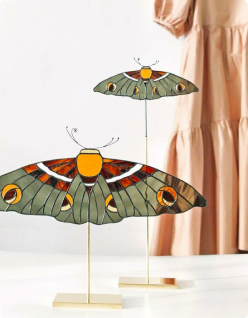 Communicate directly with a qualified glass & art glass specialist and get a fair market valuation of your item, typically in 48 hours or less.
START APPRAISAL

Communicate directly with a qualified glass & art glass specialist and get a fair market valuation of your item, typically in 48 hours or less.
START APPRAISAL

How to identify antique glass

Whether you're a passionate collector or just want to add some extra class to your interior design, you can always count on the beauty and elegance of vintage and antique glassware. But what qualifies as antique glass? Well, the definition is not set in stone, but when we say ''antique'', we usually refer to pieces made a 100 or more years ago. Anything after that, is usually considered vintage. When you go treasure hunting for old glassware, the first thing you need to look for is the pontil park. Since these are often a 100 years or more objects, the mark may be harder to spot, so use a magnifying glass if necessary and look carefully at the bottom and sides. Once you have identified the mark, you can track down the company who made it by using a glassmaker marks book or an internet search engine.
Another way to ensure the quality of a piece and find out its age, is getting acquainted with different type of glassware and the techniques used in making them. Pressed glass, for example, can be identified by the pattern. Since certain patterns were made at different times in the 19th century, it can be quite easy to find the exact date of your piece. Of course, there's always the risk of it being a reproduction, but those are usually more lightweight, with low clarity and very dull edges, due to cheap materials used in production. A cool trick to spot authentic vaseline glass is using a black-light and shining it on the glass, since it used to be colored with uranium before the WWII era. Some molds used by companies in the past were reused later as the glass regained its popularity, making it harder to tell the difference between old and new, so it's important to be detail oriented and become knowledgeable about your favorite type of glassware.

The Value Of Antique And Vintage Glass

Known for its iridescent shimmer, carnival glass was first produced by Fenton Glass Company in 1907 as a cheaper alternative to fancy glassware of that time such as Tiffany's and Steuben. The glass had a bad reputation among those with higher standards of quality, which earned it the name of ''Poor man's Tiffany'' or ''Cinderella''. It was given away as prizes at carnivals, where midway winners could go home with shimmering vases, pitchers goblets or candy bowls. But that doesn't mean all carnival glassware is cheap. Even though carnival glass was made in molds, it was often hand-finished by artisans. Those pieces are more pricey and more desired by collectors.

Art glass emerged in the mid 1800'ss, when  glass blowers started experimenting with different patterns, textures and colors. This exchange in techniques and artistry resulted in some of the most refined and highly valued glass pieces on the market such as lamp shades, bottles, vases, bowls, figural work and marbles. Early innovators like Lois Comfort Tiffany , Rene Lalique, Fredrick Carder of Steuben and Johann Loetz revolutionized the industry by creating timeless glass designs still in use today. The begining of the 20th century was the era of Art Nouveau and Art Deco glass.The first one is characterized by bright and iridescent colors and a focus on nature, while the second is distinguished by clear crystal, pastel colors and geometric designs.

The gap in American art glass in the early 1900'ss was filled by depression glass, a relatively low quality yet affordable and widely collected glass produced by corporations like Anchor Hocking, Indiana Glass and Hazel-Atlas. Depression glass has plenty to offer in terms of pattern and design, but some of the most sought-after pieces are the ones in rare color-pattern combination, limited run pieces and the pattern known as ''American Sweetheart'.

Cut glass has been produced for thousands of years, but its popularity increased during the late 19th century, in the American Brilliant period, which lasted until the early 1900'ss. Often referred to as ''rich cut glass'' during the America Brilliant period,  these pieces are intricately cut with elaborate geometric patterns and prisms. Cut glass was very expensive  and reflected the social status of the owners. Brilliant cut glass lost its popularity during the Edwardian period, being replaced by lighter, thinner and more engraved  glass. It was widely reproduced in the 1980''ss, so you should be very wary of fake items and, just like in the case of vaseline glass, perform a black light test before purchasing it.

Milk glass has been around since the 16th century, but the name itself was given in the 20th century to describe the opaque, white glass in a variety of patterns that became popular in the 1800'ss. By the early 1900'ss it became a must have item in every American household, featuring a variety of patterns and motifs, from animals and birds, to faces of American Presidents and other iconic figures of that era. As for vintage milk glass, the most sought of items are the ones produced by Westmoreland Glass and Fenton Glass. One of the most popular molds used by Fenton was Silver Crest, which has a milk glass body with a ruffled edge. Other colored edges were attached to milk glass such as Peach Crest And Emerald Crest.

Where can I sell my glass & art glass?