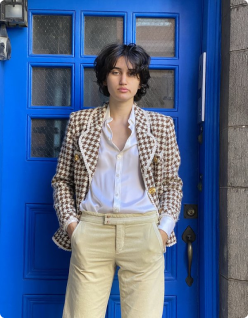 Communicate directly with a qualified fashion specialist and get a fair market valuation of your item, typically in 48 hours or less.
START APPRAISAL

Communicate directly with a qualified fashion specialist and get a fair market valuation of your item, typically in 48 hours or less.
START APPRAISAL

How much are my vintage fashion items worth?

Have you recently inherited or purchased a vintage fashion item and want to know its value? Mearto provides quick and affordable online appraisals of fashion items. All you have to do is click on the “Start Appraisal” button above and follow the steps to send us information about and images of your fashion item. One of our qualified and experienced specialists will review and get back to you with a fair market and insurance value, typically within 48 hours.

Have questions about the valuation provided, or would you like some advice about selling your fashion item? We are here to help! Our platform allows you to chat back and forth with a specialist to ensure that all of your questions are answered.

Fashion is a collecting category that is a component of the larger Luxury Goods sector. In most cases, fashion can be considered a broad term that usually encompasses clothing, handbags and accessories, and in some cases jewelry.

The market for luxury clothing, handbags and accessories share many commonalities with the fine and decorative art markets. The main hubs for buying and selling luxury fashion include New York, London, Paris, Hong Kong, and Shanghai. The structure of the fashion market is comprised of both dealers and collectors, and auction records often establish benchmarks for pricing.

In terms of appraising fashion pieces, the most important factors appraisers look for in determining value include brand name, provenance, and condition.

Brands like Louis Vuitton, Chanel, Hermes, and Gucci are the most sought-after amongst buyers and collectors. The more iconic the brand name, the more exclusive and therefore valuable the item becomes. Provenance can also be an important component of value. If an item was once owned by a well-known figure or celebrity, it almost always positively influences the value, as potential buyers often wish to experience the “exclusivity” of obtaining a piece once owned by an important individual.

What are the most expensive fashion items ever sold?

Marilyn Monroe's 'Seven Year Itch' Subway Grate Dress was sold for more than $4.5 million at a 2011 auction in Beverly Hills. Also in 2011, a Michael Jackson's 'Thriller' Jacket was sold for $1.8 million. Marilyn Monroe's "The Seven Year Itch" dress was the most expensive dress ever sold at auction for five years until a different one stole the record at Julien's Auctions in 2016.

The 'Happy Birthday' Dress, worn by Marilyn Monroe when she famously sang a sultry version of "Happy Birthday" to President John F. Kennedy in 1962, was at last sold for $4.8 million.

What is the history of fashion?

Before the mid-19th century, most clothing was custom-made. It was handmade for individuals, either as home production or on order from dressmakers and tailors. By the beginning of the 20th century—with the rise of new technologies such as the sewing machine, the rise of global capitalism and the development of the factory system of production, and the proliferation of retail outlets such as department stores—clothing had increasingly come to be mass-produced in standard sizes and sold at fixed prices.

Footwear has been in use since the earliest human history. Archeological finds of complete shoes date back to the Chalcolithic (ca. 5.000 BCE). The Romans saw clothing and footwear as unmistakable signs of power and status in society, and most Romans wore footwear, while slaves and peasants remained barefoot. In the 15th century, chopines were created in Turkey, and were usually 7-8 inches (17.7-20.3 cm) high. These shoes became popular in Venice and throughout Europe, as a status symbol revealing wealth and social standing.

During the 16th century, royalty such as Catherine de Medici and Mary I of England began wearing high-heeled shoes to make them look taller or larger than life. By 1580, men also wore them, and a person with authority or wealth might be described as "well-heeled." In modern society, high-heeled shoes are an integral part of women's fashion and are widespread in certain countries around the world.

What can be considered a fashion "accessory?"

A fashion accessory is an item used to contribute, in a secondary manner, to the wearer's outfit, often used to complete an outfit and chosen to specifically complement the wearer's look. It has the capacity to further express an individual's identity and personality as there are accessories that come in different, shapes, sizes, hues, etc. Fashion accessories can be loosely categorized into two general areas: those that are carried and those that are worn. Traditionally carried accessories include purses and handbags, glasses, hand fans, parasols and umbrellas, wallets, canes and ceremonial swords.

Where can I sell my fashion?