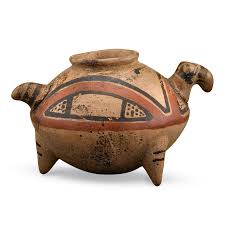 Have your Pre-Columbian art appraised online by a specialist.

How much is my Pre-Columbian art worth?

Have you recently inherited or purchased Pre-Colombian art and want to know its value? Mearto provides quick and affordable online appraisals of Pre-Colombian art. All you have to do is click on the “Start Appraisal” button above and follow the steps to send us information about and images of your Pre-Colombian art. One of our qualified and experienced specialists will review and get back to you with a fair market and insurance value, typically within 48 hours. Have questions about the valuation provided, or would you like some advice about selling your Pre-Colombian art? We are here to help! Our platform allows you to chat back and forth with a specialist to ensure that all of your questions are answered.

What is Pre-Colombian art?

Pre-Columbian art refers to the architecture, art and crafts of the native people of the Caribbean, North, Central, and South Americas until the late 15th and early 16th centuries. Pre-Columbian art encompasses the artifacts created by the indigenous peoples from the second millennium BCE to the time of the arrival of Christopher Columbus in 1492, when the existing cultures were conquered by the Europeans. Beyond the more familiar civilizations such as the Incas and the Mayans, smaller ethnic groups were able to develop their own distinctive cultures and artistic styles.

Pre-Columbian refers to all of the Americas and its islands, the largest focus on the period deals with Mesoamerica, Central America, and South America, so generally it can be divided into two parts—North America and South America. In terms of North America, it includes Mesoamerica and Central American. The highly developed civilizations of these areas share a common heritage, evolved from what is regarded as the "mother culture" of the Americas, the Olmec civilization, which flourished around 1200-400 BCE and dominated the pre-classical period. The Olmec were the first to build pyramids and ceremonial complexes in Central America. A more mature expression of art is revealed by the highly developed cultures of the Classic Period from AD200-900 which is the Maya civilization. In about AD900, successive invasions by peoples from the north put an end to the finely balanced Classic cultures and initiated the post-Classic period (AD900-1521)including the Toltec, the Mixtec and the Aztecs. The culture in South American mainly developed in the area of Central Andes. There are some civilizations that once existed in this area achieved great cultural art, including the Chavin Civilization, the Paracas culture, the Nasca culture and the Moche culture, etc.

What are the different kinds of Pre-Colombian art?

Ceremonial Architecture - The principal type was a pyramidical platform mound which has a flat top. Such pyramids in Mesoamerica were of a ceremonial rather than funerary function, and were central to the performance of religious rites. At Monte Alban in Oaxaca, and Palenque in the Maya Lowlands, these structures were found also to contain rich burials of civic or religious dignitaries, but these were of secondary importance to the main purpose of the pyramid.

There were two main types of architectural style in Central America, which are especially conspicuous in pyramid construction: the broad square talud-tablero of Mexico and the tall, narrow based Maya form. Corbel vaulting of overlapping, flat, balanced stones is also typical of Maya architecture and was used extensively as a technique in the construction of palaces and temples.

Sculpture - Sculptural art flourished in Central America, and stone sculpture is widespread across the region. Figures and friezes, ranging in scale from gigantic to very small, are fundamental to the artistic consciousness of the cultural tradition. Serpents, skulls, snarling jaguars and the grim-looking rain-god Tlaloc decorate many of the temples and palaces as whole sculptures or frieze decorations. Fine sculpture also occurs in South America from around 1000 BCE with the Chavin culture.

Pottery - Pottery manufacture was known in Central America by 2000 BCE, although glazing technique and the potter's wheel didn’t appear at that time. Pots were usually fashioned by hand or made by mould and by the early centuries CE fine polychrome highly burnished wares were being produced. The variety of form and decoration is immense. Most standard forms produced with a potter's wheel were common: plate, bowl, jar, vase and beaker with many elaborations of these. Pottery was decorated in a variety of different methods, from stamping, incision, excision, and applique in geometric designs, to polychrome painting of ritual scenes with dignitaries, prisoners and slaves.

Textiles and featherwork - Very few textiles have survived from Mexico, but there is a huge corpus from the big Andean manufacturing cultures, weaving primarily with local fiber vicuña and cotton, or a mix of the two. What remains today are primarily men’s and women’s clothing such as tunics, dresses and shawls.

Feathers were highly prized for various reasons, both among the Aztecs, Mayans and the Andean peoples.The use of  wonderfully colored Amazonian feathers from parrots and macaws is common in these cultures and  were usually connected to the trade. The feathers are often attached to textiles and incorporated into regalia such as crowns. Shields, standards, head-dresses and capes for the nobility were often created in ornate and colorful lapidary work with feathers traded from the tropical rain forests.

Metalwork - Many high-ranking individuals from these cultures wore magnificent gold pendants, crowns and pectorals, and were buried with ornate ornaments. Metalwork appeared in general use around Chavin times, by 900 BCE, although the techniques known were limited to hammering, annealing, soldering and repousse working of sheet gold and silver. Silver was primarily in use in Peru, where we find marvelous embossed gold and silver vessels and ornaments. The art of metalworking came very late to Mesoamerica.

What are the most expensive works of Pre-Columbian Art ever sold?

Mearto offers two opportunities to sell your Pre-Columbian art based on its current fair market value:

Customers with Pre-Columbian art expected to sell for $5,000 or more can take advantage of our complimentary Consignment Concierge service. We will contact leading auction houses on your behalf, collect offers and help you negotiate the terms of a consignment agreement. There is no additional fee or commission for this service.

For customers with Pre-Columbian art valued between $50 and $5,000, Mearto offers an exclusive Marketplace, which is accessed by a number of art, antiques and collectibles dealers around the world. If there is interest in your item, you will be contacted directly with offers through our platform. In the event of a successful sale, Mearto takes a 7% transaction fee.

To learn more about options for selling your Pre-Columbian art through Mearto, please click here.