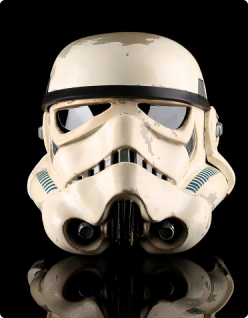 Communicate directly with a qualified Entertainment & Film Memorabilia specialist and get a fair market valuation of your item, typically in 48 hours or less.
START APPRAISAL

Communicate directly with a qualified Entertainment & Film Memorabilia specialist and get a fair market valuation of your item, typically in 48 hours or less.
START APPRAISAL

How much is my movie memorabilia worth?

Have questions about the valuation provided, or would you like some advice about selling your entertainment or film memorabilia? We are here to help! Our platform allows you to chat back and forth with a specialist to ensure that all of your questions are answered.

What is the history of collecting film and entertainment memorabilia?

Most entertainment events, whether theater, film or music, involve the production of items like advertising posters, tickets and playbills, programs, costumes, contracts and scripts. All of these may be valuable depending on their rarity, condition and other factors. Collectors have preserved vintage playbills, posters, and ticket stubs from theater and musical performances as far back as the 1800s.

When the film business began, items that may be considered valuable today were not recognized as such. Props, costumes, scripts and other objects were often disposed of or disappeared. Some people collected celebrity autographs, photographs or advertising posters. Film memorabilia collecting became more popular over time and blossomed in the 1970s, when the movie industry realized there could be significant resale value attached to items used in a film production. In 1970, MGM auctioned off their enormous collection of costumes, props, and more. This was the most significant auction event in the film industry up until that time and people began to take note of the value of collecting these items.

How is entertainment and film memorabilia classified?

Entertainment memorabilia may be classified by decade or genre. For example, some categories may include 1960s science fiction movie props and costumes or 1940s film noir posters.

What are some of the most rare or unique items of film and entertainment memorabilia?

MGM’s 1970 auction included several rare and valuable items. A pair of Judy Garland’s ruby slippers from The Wizard of Oz (of which there are five known pairs) went for $15,000. This price was unheard of at the time for film memorabilia. However, in 2012, another pair of the slippers went for $2 million!

The Beatles first recording contract, signed by all four members (along with George Harrison and Paul McCartney’s fathers!) in 1962, sold for $426,478 in 2008.

What was the most expensive film and entertainment memorabilia item ever sold?

In the world of costumes, the iconic white “subway dress” worn (and held down against a gust of air) by Marilyn Monroe in the film The Seven Year Itch was sold for an astonishing $4.6 million in 2011.

How is film and entertainment memorabilia valued?

Film and entertainment memorabilia are valued according to many factors. These include condition, provenance, era, genre, and type of item.

It is important that the item has been kept in good condition. Costumes and props may be delicate and need to be kept clean and away from mold and sunlight. Paper goods such as scripts, photographs or playbills should also be clean and kept in archival and acid-free storage boxes or sleeves if possible.

The value of an item will vary based on its source. Items from a well-known movie or concert or associated with a famous actor or artist will have a much higher value. The type of item will also make a difference in its value. Since entertainment and film memorabilia can come in so many forms, their valuation will depend on many different factors, and it may be especially complex to determine a fair market value. Getting an online appraisal by a Mearto specialist is key to estimating the price you can expect for your item.

Where can I sell my Entertainment & Film Memorabilia?