We examined all successfully sold lots from Christie's and Sotheby’s during 2016 and 2017.
Our analysis covers 195,479 lots from 1199 catalogues, and represents sales made in major cities around the world.

That makes our study one of the most extensive and comprehensive ever conducted on Christie’s and Sotheby’s successfully sold lots.

Our major discovery: Detailed distribution of hammer price vs estimate. Also, Sotheby’s is within or above their estimate 80% of the time, while Christie’s is successful 74% of the time. Numerous additional findings are summarized through infographics.

Use of content
Contact Mads at [email protected] if you need additional information or have any questions. Use of any part of this article is permitted, provided that Mearto is credited as the original source.

Both auction houses sold slightly fewer items in 2017 than in 2016. 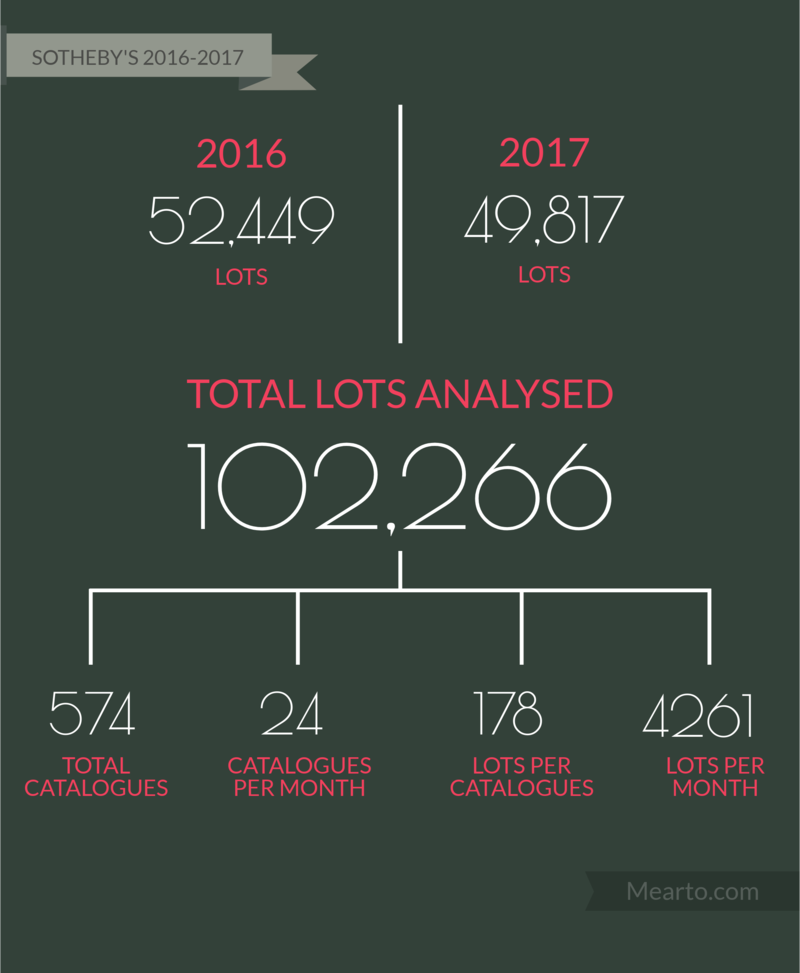 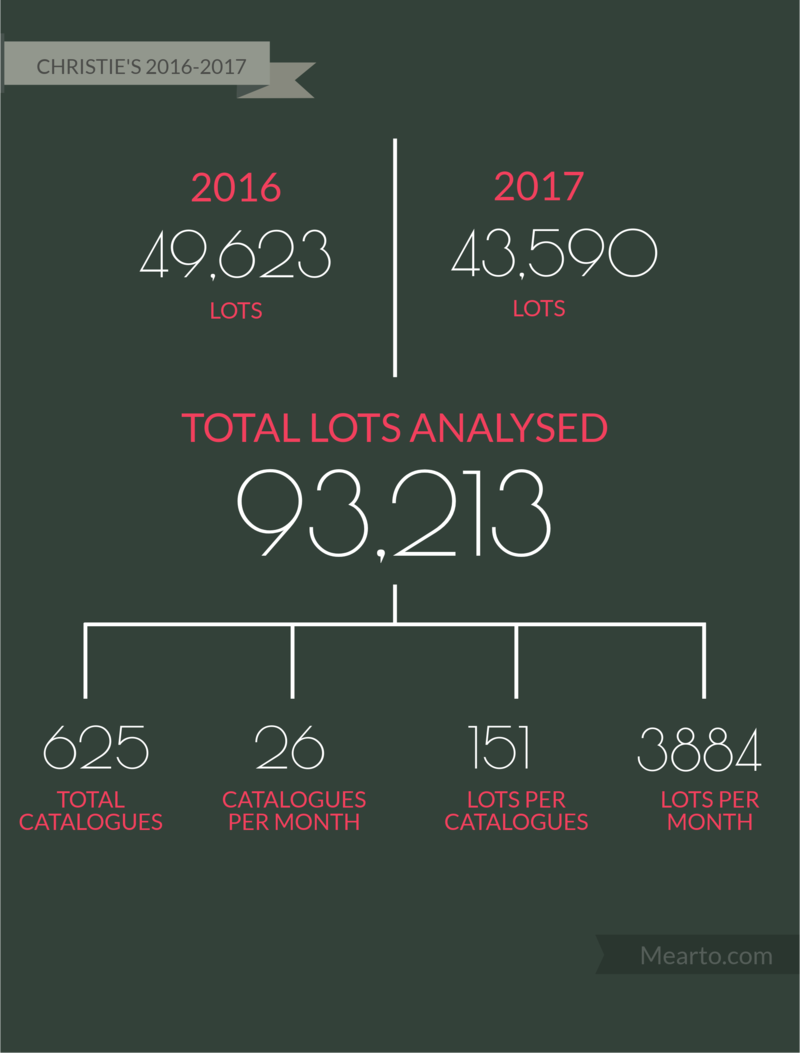 Christie’s, London and New York together represent approximately 70% of all lots, followed by Hong Kong and Paris at 13% and 12% respectively. For many years, Christie’s held a December sale in Mumbai; this practice was discontinued in 2017. Also feeling the effects of centralization, Christie’s Amsterdam and South Kensington salerooms now show signs of waning.

Sotheby’s overall trend towards centralization is equal to or even greater than Christie’s. Currently, a combined 96% of Sotheby’s items are sold through just four auctions: London, New York, Hong Kong and Paris. 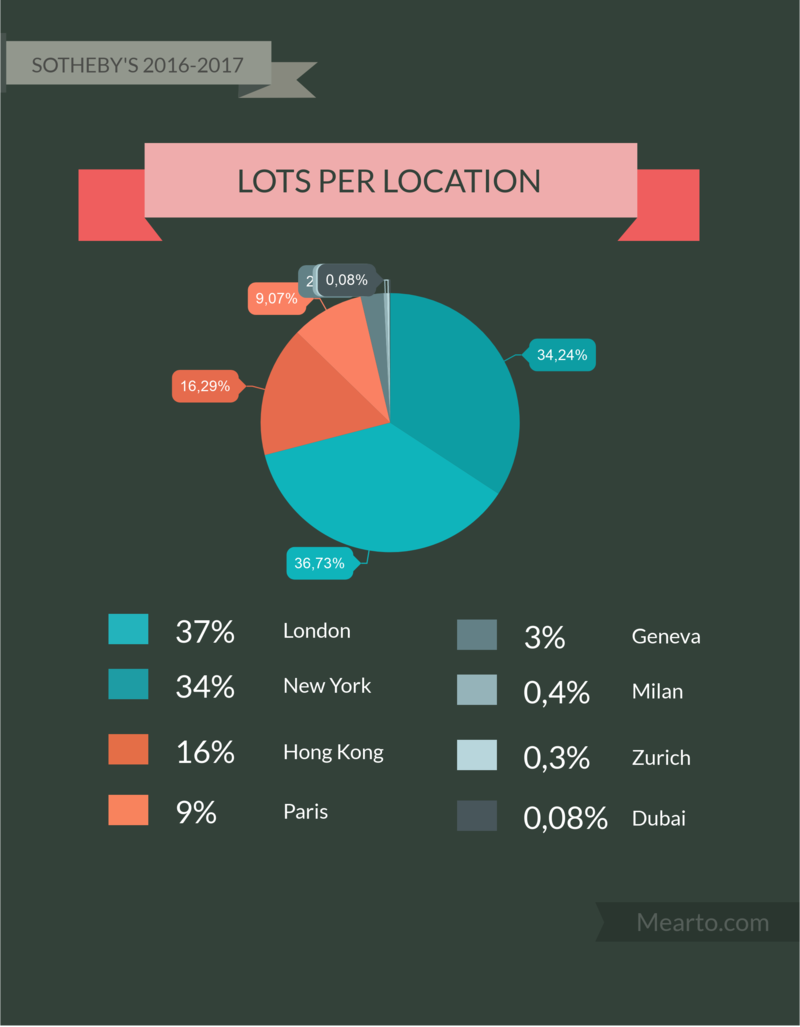 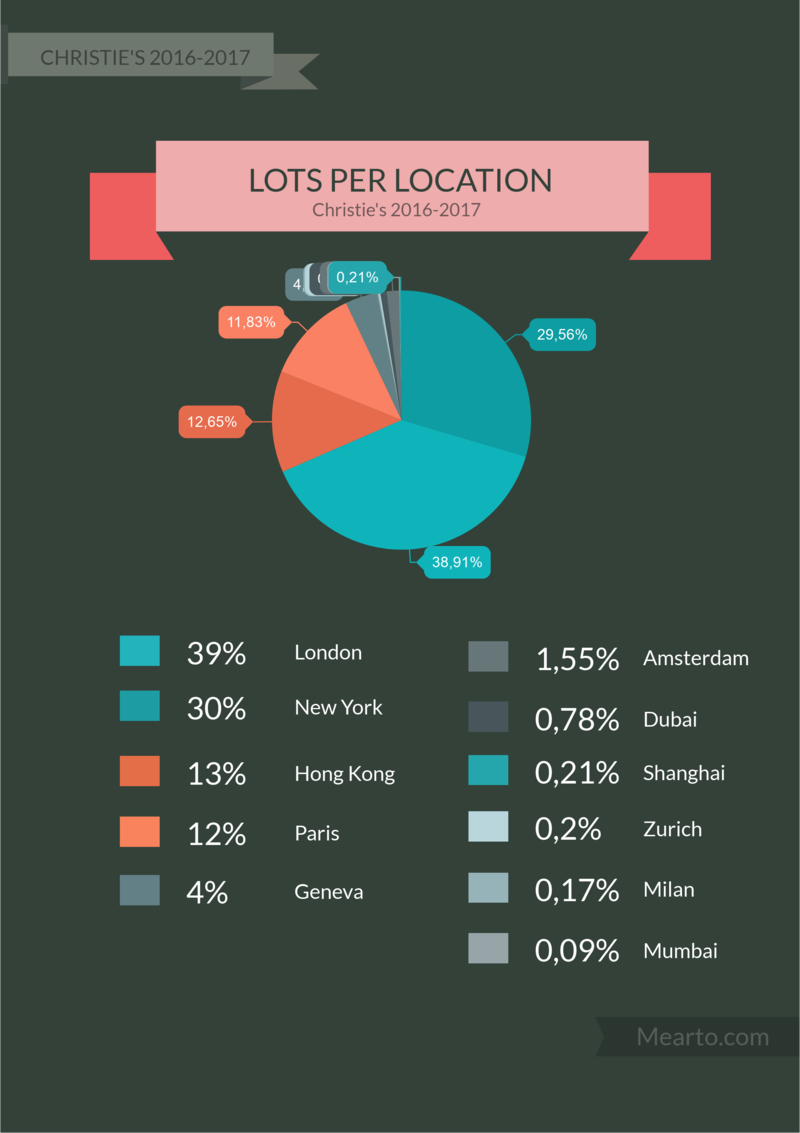 Christie’s has higher estimates than Sotheby’s 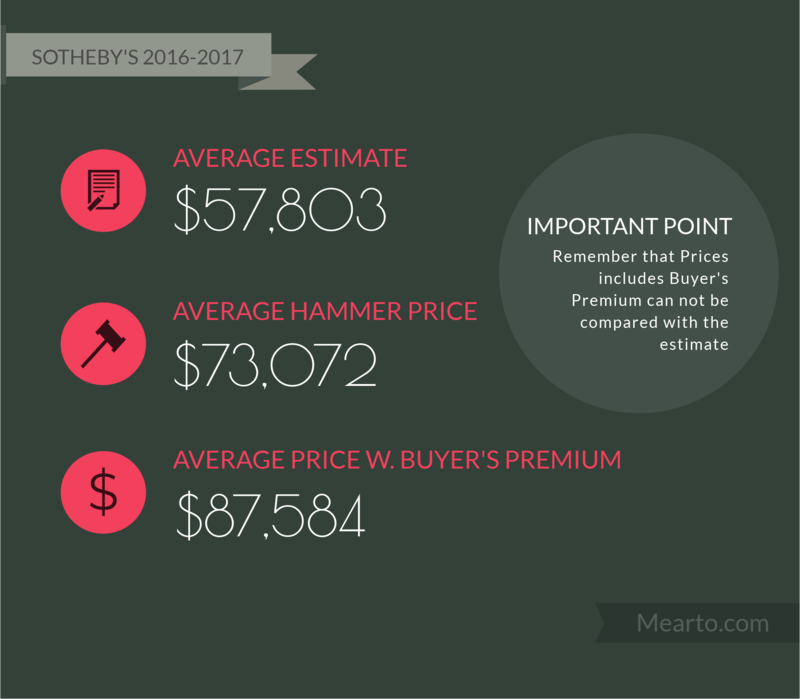 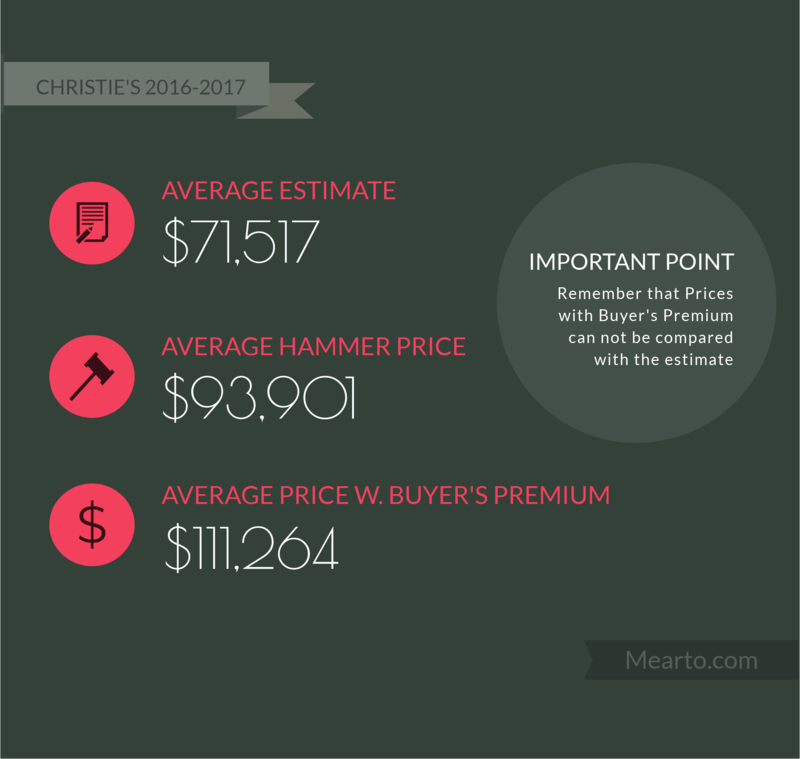 Within or above estimate, Sotheby’s is more accurate

Of all lots sold at Sotheby’s, 80% are within or above the estimated range. This makes Sotheby’s the clear winner when it comes to accuracy. They maintain this edge by being slightly conservative in their estimates – 43% of lots are sold above the max estimate, 37% within, and 20% below. 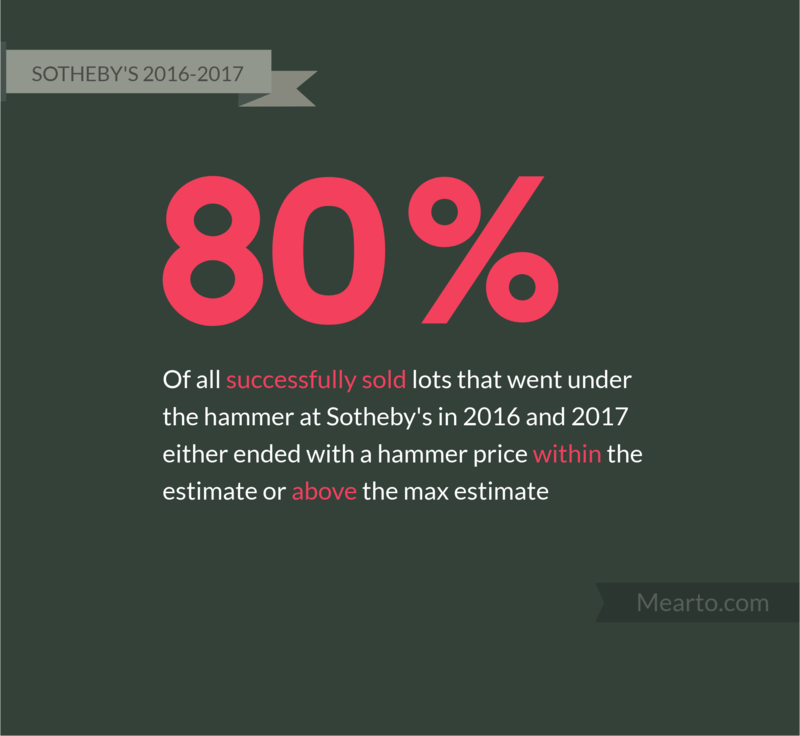 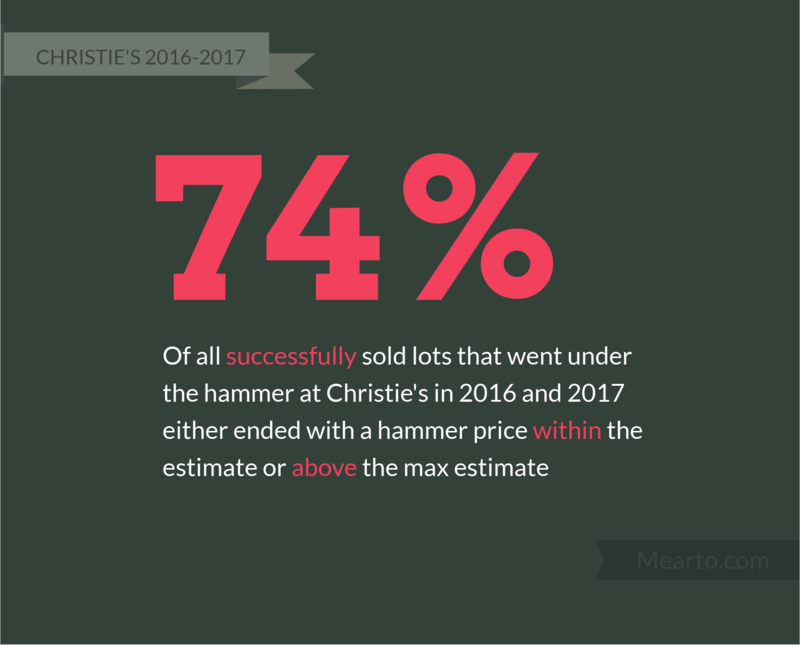 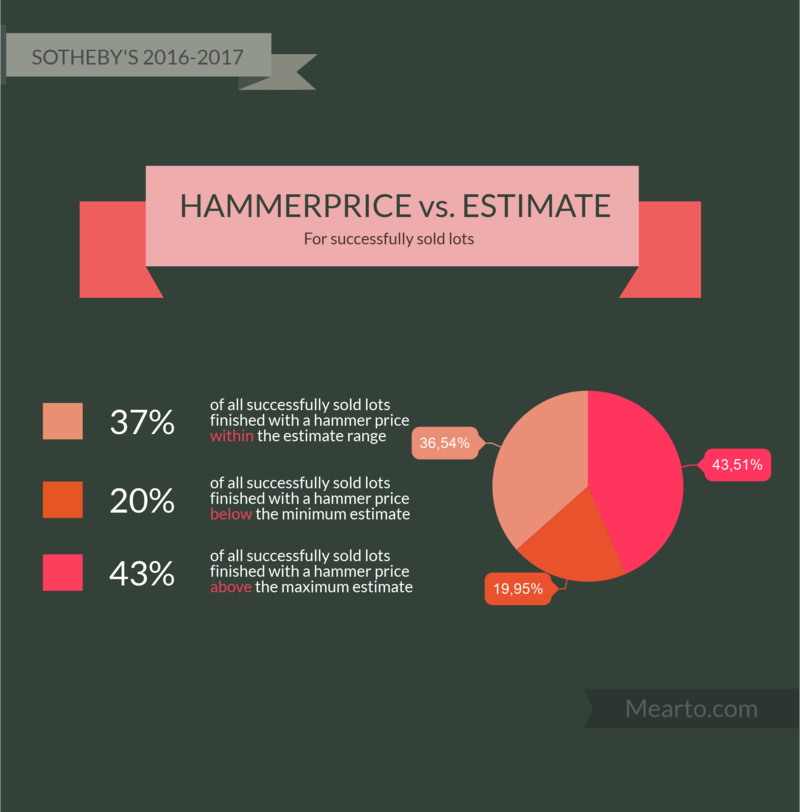 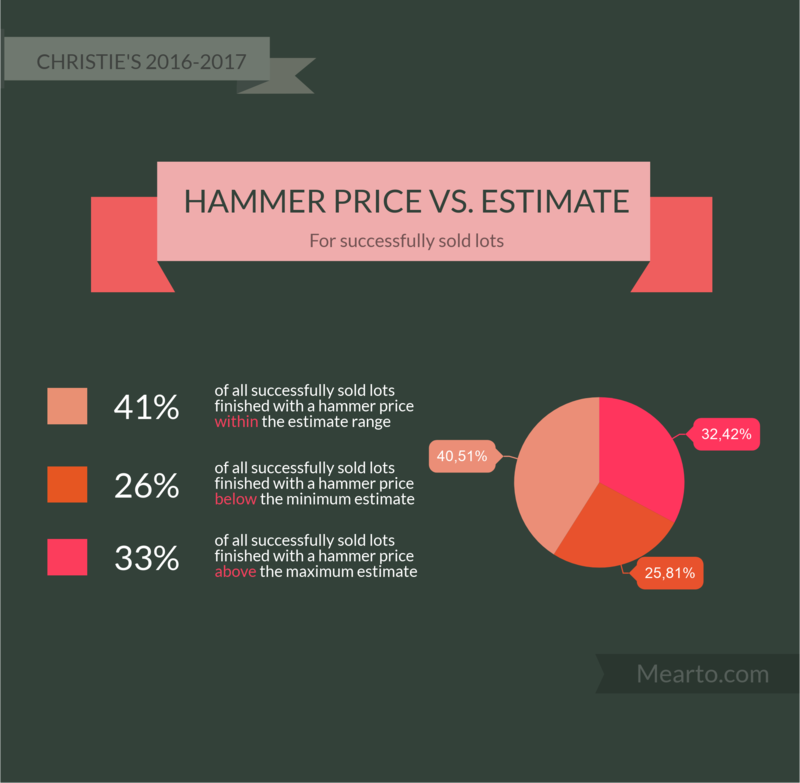 Clear differences in the accuracy of estimates appear when taking location into account.
For both Sotheby’s and Christie’s, an item is more likely to sell within or above estimate in London or Hong Kong than in New York.

Because small offices like Milan, Zurich, Dubai, Mumbai, Geneva, and Shanghai represent only a minor portion of all lots, it is difficult to draw conclusions about performance in these locations. 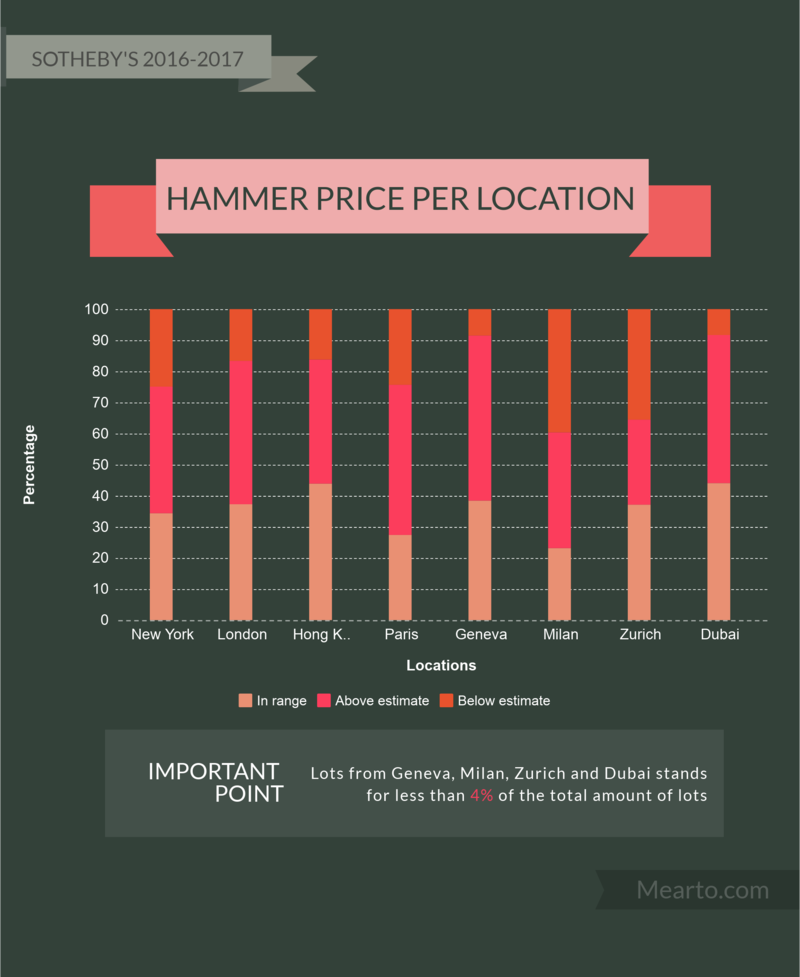 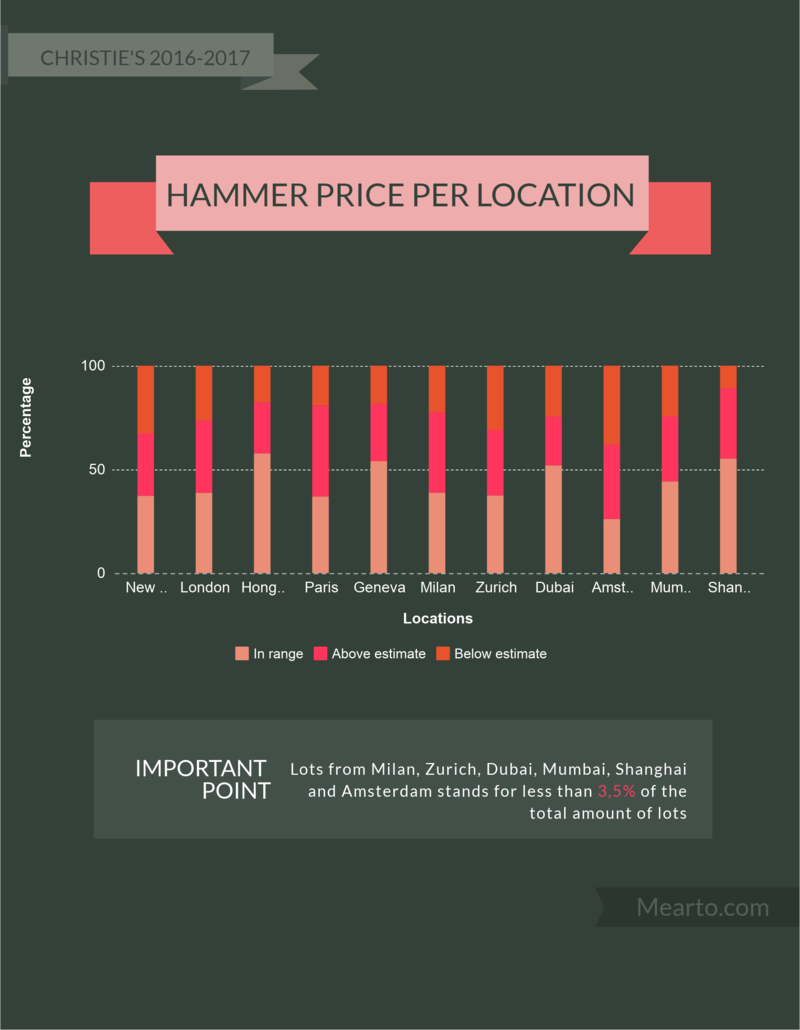 The following infographics show the distribution of hammer prices against their initial estimates. As discussed earlier, around 40% of lots sold at both Sotheby’s and Christie’s fall inside the estimated price range (point 0 on the ‘hammer price distance from estimate’ axis).

For sake of presentation, the furthest right-hand point contains all values ≥ 150%; this appears as a peak on the graph. 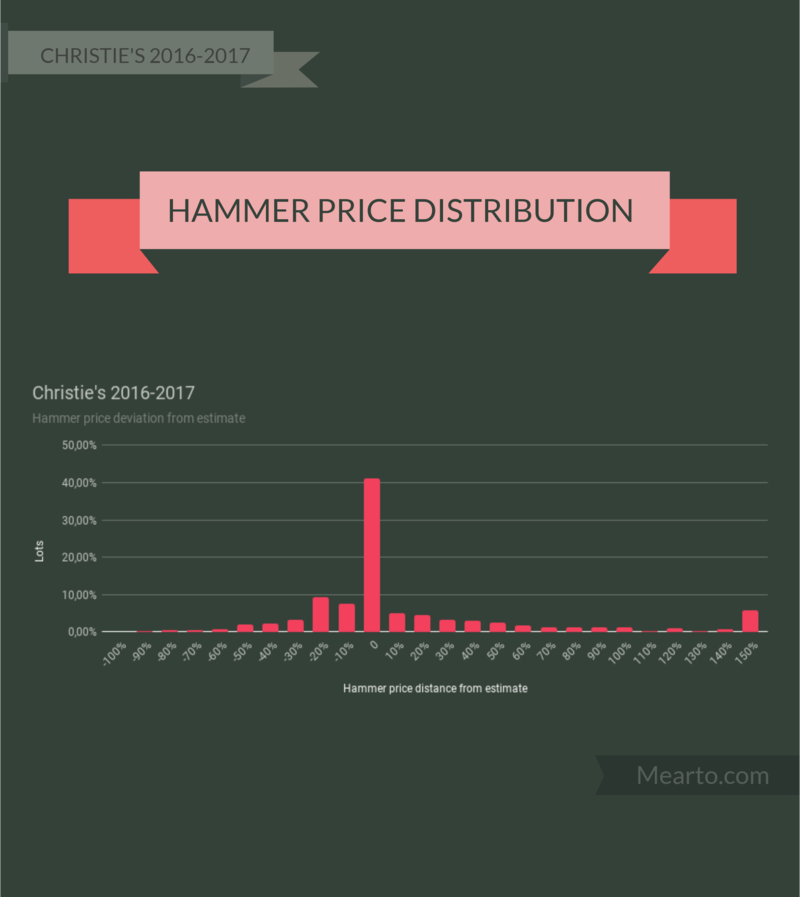 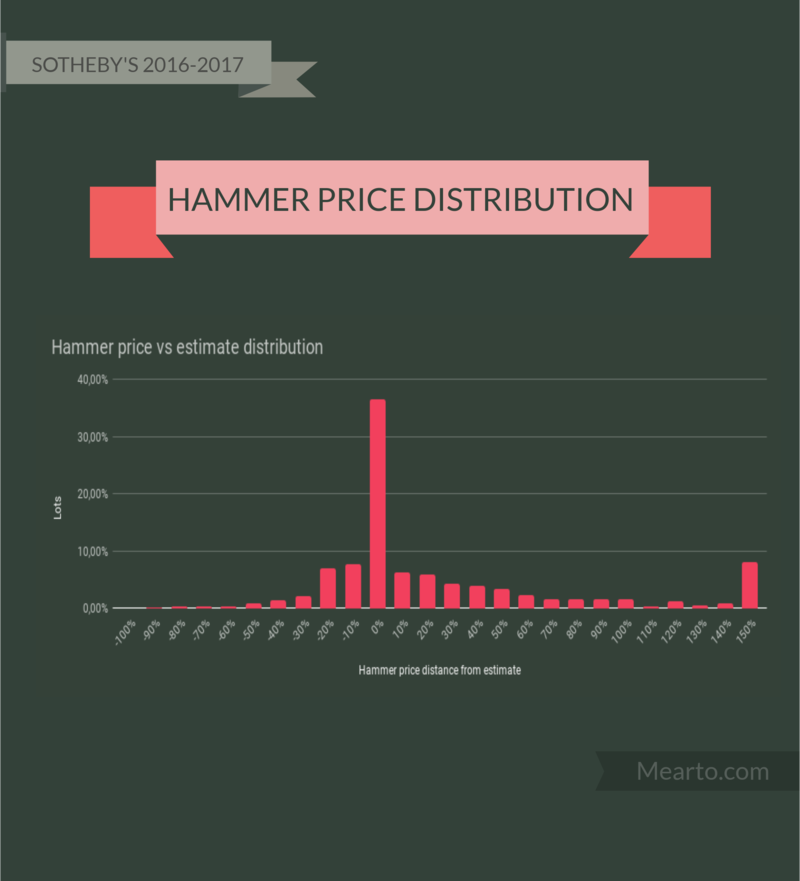 Notes about this analysis

When an auction house gives an estimate, it is their informed opinion on how the item will likely perform at their auction. The specialists that generate these estimates work from both their own knowledge and from analysis of historical auction results. The latter is generally a good indicator of a probable sale price. For an item to perform as expected, the right buyers have to be present at the right auction.

All the lots analyzed in this study are posted on Christie’s and Sotheby’s respective websites and are restricted to the years 2016 and 2017.

Both Christie’s and Sotheby’s organize their accessible lots into catalogues.

To get a sense of the global market dynamics at play within Christie’s and Sotheby’s, lots were grouped according to city.

Lots sold by Christie’s and Sotheby's are given an estimate and a final sale price. The posted sale prices include buyer’s premium and therefore cannot be used directly for comparison against hammer price estimates.

Let’s look closer at how the buyer’s premium (bp) is calculated. The bp charge is divided into tiers depending on the size of the hammer price.

As an example, a hammer price of $4.8 million means that the buyer’s premium is calculated as follows:

That is, if the lot is sold in New York. It’s important to keep in mind that every location has its own buyer’s premium rates.

When examining individual sales, it is difficult to conclude on first glance whether the lot was below, above, or within the estimated price range.

Continuing with the above example, if the estimated hammer price was $5.5 m - 5.9 m, it would be tempting to conclude that a $5.9 m sale price is within estimate. However, the actual hammer price of the lot is $4.8 m, meaning that the the lot underperformed by 13%.

Conversely, if the estimated hammer price was $4.5 m - $5 m, a $5.9 m sale would appear to be performing well above estimate. In reality, it is within the expected range.

From Buyers Premium to Hammer price

By reversing the formula described above, we can isolate the hammer price

Lots are displayed with various currencies depending on sale location. The following currencies were encountered in this study: USD, GBP, CHF, CNY, EUR, HKD, INR.

In order to compare prices across different locations, all estimates and prices were converted to USD. The same conversion rate was applied to all lots of a given currency. While global currencies naturally experienced small fluctuations between 2016 and 2017, those discrepancies are small enough to be disregarded for purposes of this study.

Christie’s does not provide complete information for certain lots. For cases where the estimate or hammer price is not stated, the lot is discarded and not used for this analysis.

Additionally, unsold lots from Sotheby’s have not been considered in this analysis.

Mearto.com is an online art and antique appraisal company. The service launched in spring 2017 and has already helped more than 16,000 private sellers in the US, UK, Canada, Australia, Germany, and Scandinavia. In addition to online appraisals, Mearto also helps connect private sellers with interested auction houses and potential buyers, all within a user-friendly platform. The company is based in Copenhagen with investment from SEED Capital, Bumbleventures, Seier Capital and the Danish Innovation fund.

Learn more about the company at https://www.mearto.com

Use of content
Contact Mads at [email protected] if you need additional information or have any questions. Use of any part of this article is permitted, provided that Mearto is credited as the original source.